How Not Managing Mobile Customer Feedback Makes You A Rookie!

ChatBots Or Not: Craze Du Jour Or Something More?

This article first appeared on devops.com.

Managing mobile customer feedback effectively could be the single most important success factor for your company and customers. Call it addiction or habit, but every passing day we encounter new data confirming the growth of mobile app usage and total hours spent interacting with them. In the 2015 U.S. Mobile App Report, the CoreMetrics team has shared some useful data metrics regarding digital media consumption growth and app usage. A couple of notable themes or trends are:

It is evident from this data, that as a Mobile App Developer you want customers to include your App on their home screen. That means not only having a compelling utility but ensuring that the App is of the highest quality. In the rest of the article I will illustrate how you can accomplish just that by incorporating mobile customer feedback loops in every stage of the development cycle and involving and engaging customers through your path to production. Along the way we will also look at various open source and commercial tools that enhance the ability to collect feedback at various stages of the continuous delivery pipeline.

Most agile or lean software organizations have an automated continuous integration and delivery pipeline that helps manage the flow of release artifacts to production. While there might be nuanced variations across teams and enterprises the typical path to production for Apps or Services is represented through the steps shown. 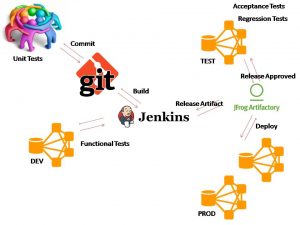 It will be useful to review this pipeline as we explore options to incorporate feedback throughout the path to production.

Not too long ago, most negative user feedback consisted solely of poor ratings, comments and rants on social media platforms. Without having context, metrics and data, most development teams were left guessing on how best to reproduce and determine extent of the issue. This usually resulted in issues and features getting prioritized in an ad hoc manner.

Today numerous open source and commercial tools are available that help solve the feedback problem. Most of them can be categorized in the following broad areas:

Leveraging data driven tools throughout the continuous delivery pipeline increases the odds of a quality and high utility mobile app. Even in situations where it is not possible to expose apps prematurely, it is possible to dog food your app – a term referencing a team or company that actively utilizes it’s own product with the intent of testing it. For example, frequent builds tied to developer commits enable alpha build testers and other team members to download and test the App. Meanwhile beta builds can be downloaded by other members of the company. As release candidates emerge the beta community can be expanded to include members of the app community. 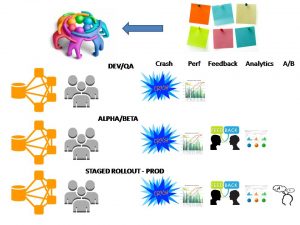 So take steps to incorporate mobile customer feedback loops at every step of the development cycle and garner a majority of the app users engagement time. Would love to hear how you and your teams are leveraging tools and techniques to build better apps and continuously listen to customer feedback.

Newstar.Cloud helps to support the launch of Professional Services in AWS Marketplace